At my sons Bar Mitswa: What does it mean to carry on a tradition? 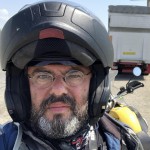 Last summer I drove to Romania; I wanted to visit the birthplace of one of the most inspiring Rabbis I know: the Lubliner Rav, Meir Shapiro. An amazing person who achieved great things. First of all; he is the inventor of the Daf Yomi. The effort where all Jews who participate in it, read the same double page of Talmud every day; in a sequence of about 7½ years the whole Talmud is read.

Not only did Shapiro come up with this crazy idea; he also succeeded, as a relatively young man, to persuade the biggest Rabbis of his time to support it. A second initiative was an amazing yeshiva: Lublin. An amazing institute. Not only did Shapiro think about the curriculum; he also succeeded in persuading thousands of people to fund it. Thirdly, Shapiro was an influential member of the Polish parliament; the Sejm. Fourthly, he was an amazing Torah commentator. In other words: Shapiro was a towering religious, political, organizational and convincing figure.

When you’re a spectator at a Jewish religious ceremony, or you hear people speak about the Hebrew Bible or witness songs of praise, lofty speeches, solemn melodies, you may be mistaken and think the Hebrew Bible is a book for solemn and obedient people. People that dwell in contemplation and seek spiritual happiness by directing their inner thoughts.

Alas, no. That’s not our Torah. Our Torah, our tradition, is a sequence of fights, challenges to status quo and power, rebelling against kingdoms, struggles with faith, loyalty, family, religion. Everything that human has a place. Murder, rape, theft. But also love, lust, greed. And doubt, wrong decisions and mistakes. It is a profoundly human, worldly and political book.

To be a Jew, to be a Jewish man, means that you carry in yourself the legacy of your ancestors. Not only from us, your parents (yes, I apologize for you als having things in yourself that you think are not good, but fortunately, you have the power to do with it what you want), but also from your Patriarchs: Abraham, Isaac and Jacob.

But how? How can you relate to this ancient literature?

I’ll say something about Jacob, who is in this week’s parasha in a minute, but first I want to say something about our first patriarch, Abraham. We all know the story about how Abraham had no offspring and in Genesis 15:5, and in his old age, is taken outside and told “Please look heavenward and count the stars, if you are able to count them; so will be your offspring.”

In todays parasha, wayigash, we see forefathers overcoming the impossible too. At least in the eyes of our Patriarch Jacob. At the age of 130; in the vast knowledge that his favorite son Joseph died, after not having seen him for 22 years, he sees learns that not only he is alive, but has become the vice-king of Egypt. Imagine! You can understand the emotion when father and son meet:

And Joseph harnessed his chariot, and he went up to meet Israel his father, to Goshen, and he appeared to him, and he fell on his neck, and he wept on his neck for an even longer time.

Crying is written in the singular here; there was only one person who cried. And there is a difference in opinion as to who cried here; even though the perspective is from Josephs side (and Rashi says that it was logic that he was the one who cried), Rabbi Nachmanides thinks it wasn’t he who cried. After all: he was 39 at the time, a dignified person of power. Moreover: it would not be befitting to fall on his neck. He should have bowed or kissed his hands. Also: we know that Jacob was nearly blind at this time, so hewould have to come close to his sons face in order to recognize him. Finally, Jacob does a lot of crying in the Torah. In fact, he has been crying for 22 years over the loss of his son.

There are two important historic steps here. In a literal sense. First of all, Joseph makes the miracle in Jacobs eyes happen by harnessing his chariot and riding towards him. Secondly, Jacob and his family move to Egypt. When Jacob is introduced to Pharaoh, the conversation is remarkable:

So Joseph brought his father Jacob and stood him before Pharaoh, and Jacob greeted Pharaoh. And Pharaoh said to Jacob, “How many are the days of the years of your life?”

In other words: he connects his story to that of his father Isaac and grandfather Abraham.

More remarkable is what happened later: the children of Jacob evolve into a people. With an identity, a culture and a legacy. And all this happened around the 17thcentury before the common era. All it took was people taking first steps. Abraham to accept monotheism, Jacob to move to Egypt; Josef to forgive his brothers and go and greet his father. The actions of our forefathers depended on their first steps.

And see, now we’re 38 centuries later and we also witness a miracle. Notwithstanding the efforts of those who sought to annihilate us, a young man has decided to continue the tradition of his forefathers. And just as you relate to your forefathers by doing this, your forefathers relate to you. And just like your forefathers took first steps, so did you. You decided you wanted to read the full parashah, and the haftara, and lead part of the service, and lead most of the Friday night service. You decided you wanted to lay tefillin (and wanted gassos tefillin) and you are the one that wanted to make Kiddush, lead the bentching and make havdala.

Becoming a Jewish man means you can attain the impossible. All it takes is a first step.

And to show you that we will support you in every first step, I will now bless you as we learnt:

May God bless you and guard you.
יְבָרֶכְךָ יְהוָה וְיִשְׁמְרֶךָ

May God show you favor and be gracious to you.
יָאֵר יְהוָה פָּנָיו  אֵלֶיךָ וִיחֻנֶּךָּ

4 gedachte over “At my sons Bar Mitswa: What does it mean to carry on a tradition?”